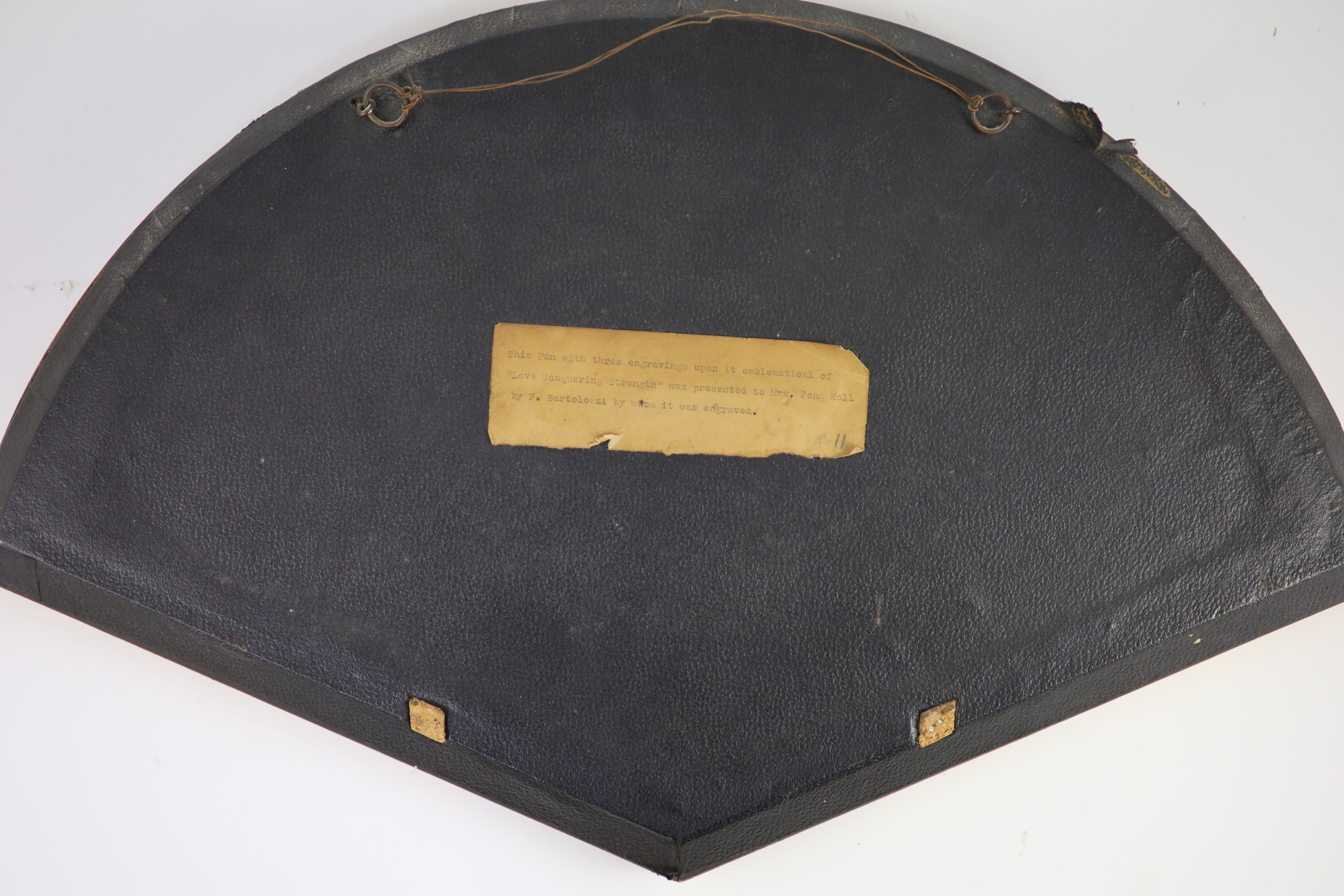 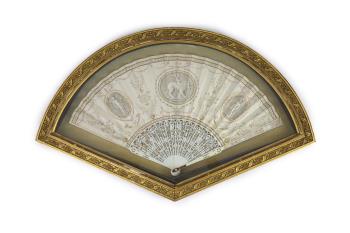 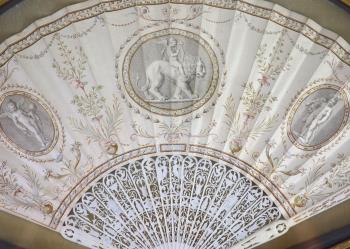 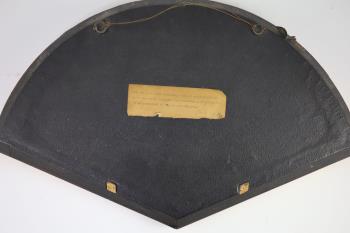 A fine late 18th century ivory and printed vellum fan, engraved by F. Bartolozzi (1727-1815),
the leaf printed and handcoloured in England with cherubs in reserves, and flower garlands, emblematic of the Power of Love, the ivory sticks and guards probably from Dieppe, carved with neoclassical figures, birds and vessels, an old label states that the fan was gifted to Mrs John Hall by Bartolozzi, possibly the wife of John Hall, glass manufacturer in Bristol or a contemporary engraver of the same name, cased.
An identical fan is in the Royal collection RCIN 25378. Although the fan in the Royal collection is attributed to Antonio Poggi he is known to have published works by Bartolozzi and John Hall.

Literature - In the central medallion winged Cupid (holding a kithara, similar to a lyre), symbolising Love, rides a lion. On the left is Cupid with stick and ball; on the right is the infant Hercules. All these figures may be taken as symbols of the power of love; they all derive from Antique gems. The central figure is copied from the gem engraved (i.e. carved) by Protarchos, which was illustrated several times in the seventeenth and eighteenth centuries. The guards feature a decorative winged interpretation of the moon goddess Diana.

A line of printed text, with the name of the fan-maker and publisher Antonio Poggi (fl. c. 1769 - after 1803), is just visible at the foot of the leaf, above the gorge. Mr Poggi, of St George's Row, Hyde Park, was highly regarded both as a maker of fans and as a painter. He is said to have arrived in London in the train of Pasquale Paoli, the Corsican patriot, and exhibited pictures at the Royal Academy in both 1776 (when he was still based in Rome) and in 1781. After Fanny Burney visited his shop with Sir Joshua Reynolds in March of the latter year, she recorded seeing:

some beautiful fans, painted by Poggi, from designs of Sir Joshua [Reynolds], Angelica [Kauffmann], West, and Cipriani, on leather; they are, indeed, more delightful than can well be imagined: one was bespoke by the Duchess of Devonshire, for a present to some woman of rank in France, that was to cost £30 . . .

The Power of Love was the earliest dated fan to be published by Poggi. It was followed by Victory in 1782, with Children playing Battledore and Children with Tops in 1788, Shakespeare's Tomb (after Angelica Kauffman) in 1790 and Cupid and Psyche in 1797. An auction of Poggi's stock held in London by Messrs Christie and Ansell on 11 April 1783 included fans made by Poggi himself (and by Bartolozzi, Kauffman and West), while lots 99-116 were described as 'Drawings of Fans'; these included The Universal Power of Love which presumably relates to the design shown on the present fan.

Poggi frequently published the work of the engraver Francesco Bartolozzi (1725-1815), and Lionel Cust believed that Bartolozzi rather than Poggi engraved this fan leaf. A total of eighteen engraved fan leaves, including the present one, were included in the catalogue raisonné of Bartolozzi's work. The artists responsible for the designs that Bartolozzi engraved included Cipriani, Angelica Kauffmann, Joshua Reynolds and Benjamin West.

Later in his career Poggi set up as a dealer in Old Master drawings, and in 1793 he helped to disperse Sir Joshua Reynolds's collection. By 1801 he was supplying drawings to the Prince of Wales (the future George IV). In February 1803 he wrote to request payment of his invoice: he was on the point of 'quiting [sic] this Country' after 'various disappointments'. It is unlikely that this fan has an early royal provenance; it was purchased by Queen Mary from the Red Cross Gift House in July 1916.

Condition:
Some light wear and staining to the outer folds of the leaf with a little discolouration to the lower left. Pale pink end paper a little faded and worn. Case with a few losses to the edges.