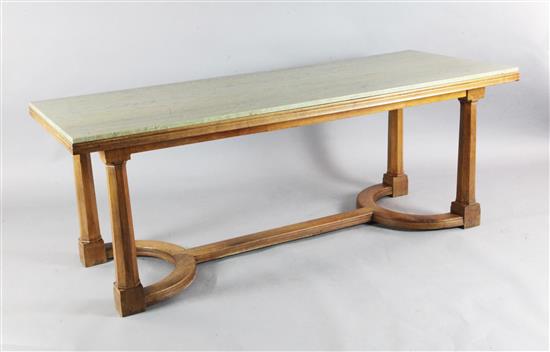 Sir Edward Brantwood Maufe, RA, FRIBA (1882-974) was an English architect and designer. He built private homes as well as commercial and institutional buildings, and is noted chiefly for his work on places of worship and memorials. Perhaps his best known buildings are Guildford Cathedral and the Air Forces Memorial. He was a recipient of the Royal Gold Medal for architecture in 1944 and, in 1954, received a knighthood for services to the Imperial War Graves Commission.
Maufe's wife, Prudence, was chief buyer for Heal's department store in London.
Crossley and Brown applied the traditional principles of the Arts and Crafts movement, inspired by the Cotswold school of craftsmen, from their workshops in Willesden and their showrooms in Golders Green made this table as a special commission.

W.2ft 6in.
H.2ft 5in.
Measurement between legs at the base is 5ft 1in. and at each end 1ft 5.5in.
One or two small nicks to the edge of the marble top, and some light surface wear to the top of the stretcher and other extremities but overall in very good condition.