Lot 2 , The Beatles - a rare set of four signatures of the individual band members on a The Beatles Show programme, for their Hong Kong show 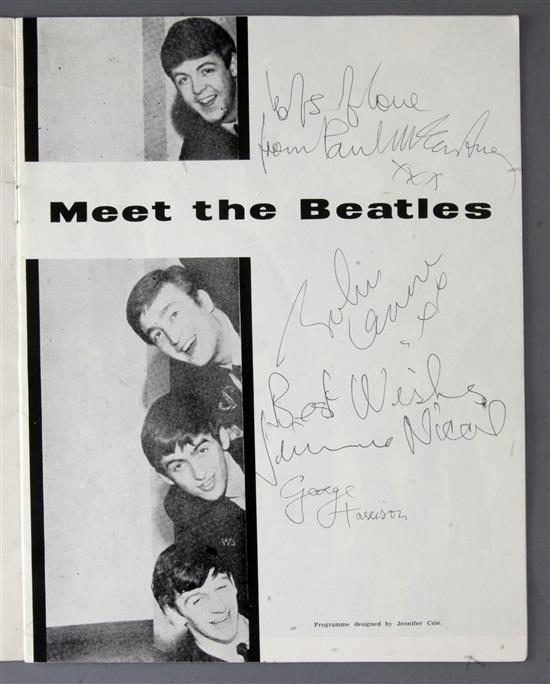 The Beatles. A rare set of four signatures of the individual band members on a 'The Beatles Show' programme, for their performance in Hong Kong, 9th June 1964, inscribed in black ink on 10th June 1964, by John Lennon, Paul McCartney, George Harrison and Jimmie Nicol on the frontispiece. On the 3rd June 1964, the day before The Beatles left for a tour of Scandinavia, Holland, the Far East and Australia, drummer Ringo Starr collapsed with tonsillitis and was sent to hospital. The band`s manager, Brian Epstein, and record producer, George Martin, arranged for a stand-in drummer, Jimmie Nicol to take over between the 4th-14th June 1964, rather than cancelling part of the tour. Martin suggested the shy 24 year-old session drummer Nicol whom he had become familiar with during recording sessions at EMI. Nicol`s first concert took place on the 4th June in Copenhagen, Denmark and he played with The Beatles for a total of eight shows until Ringo Starr returned to the group in Melbourne, Australia, on 14th June 1964.
Estimate £800-1,200


The vendor of this lot Barbara Riordan, was a BOAC first class air stewardess from October 1957 to May 1976. She served the Beatles on flight BA 900/263 boarding 8th June 1964 at Karachi - Calcutta - Bangkok and disembarking at Hong Kong on a BOAC 707 G-ARRA. After performing at the Princess Theatre in Kowloon, The Beatles departed on 10th June on flight BA 801 from Hong Kong - Manila - Darwin and embarking at Sydney. It was during this flight that stewardess Barbara Rordan obtained The Beatles signatures on the programme she had kept from seeing them perform at the Princess Theatre in Hong Kong the previous night. The lot comes with a letter from the vendor confirming the provenance of the programme and the Beatles signatures. The vendor has kept details of the dates of all of her flights in a log book which is not included with this lot.

There are six pages i.e. 12 sides. The cover has some wear including some old creases that are now flattened out but the high points have worn back to white and the edges also worn back to white but no major tears or chips, the corners are slightly dented and folded commensurate with age, the autographs on the title page are clear and haven't faded, the lettering has been impressed into the page and therefore clearly not a photocopy.