Lot 482 , A Bodil Kjær rosewood freestanding working table desk with underframe of chromed steel W.6ft 7in. D.3ft 3in. H.2ft 3in. 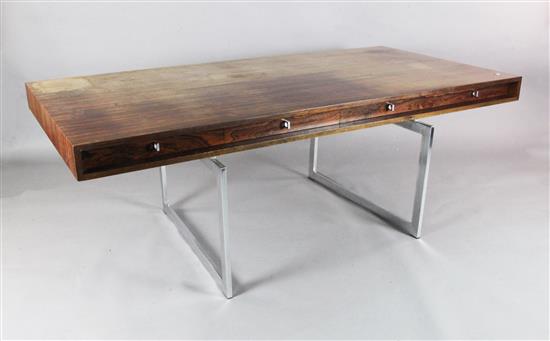 Bodil Kjaer (1932-) trained as an architect and is known mostly known for her designs in noble woods combined with a modern and sleek chrome base. The most important part of her furniture design career was from 1959-1964. She is mainly recognized for her flexible office furniture, designed in the 1960s. Her design language is greatly inspired by the Modernist masters such as Ludwig Mies van der Rohe. Her furniture has been greatly used in public buildings such as Harvard University and Massachusetts Institute of Technology. Known as 'The most beautiful desk in the world' or the 'James Bond desk' this design classic features in three James Bond movies from the 1960s and 1970s; From Russia with Love, You Only Live Twice and On Her Majesty's Secret Service the design also appeared more recently in 2014's Kingsman: The Secret Service.

This desk stood in the study of a house in Haslemere for many years with its back against a window, there is therefore pronounced fading with the back of it down to a pale golden colour and little of the original rosewood finish showing to the top except at the extremities of the front, in addition there is a more pronounced bleached patch to the back left corner which looks like water damage and further other water damage spots on the top, sides probably slightly faded but still of good colour, fronts of the drawers which have remained out of the light remain with the original colouring, drawers run smoothly, a paper label has been removed from the inside of the right hand drawer, locking system operates from a lock at the top right of the desk, key is not present but drawers are unlocked, chromework to the underside again oxidised and a little worn commensurate with age, overall a good piece that should restore to good effect.