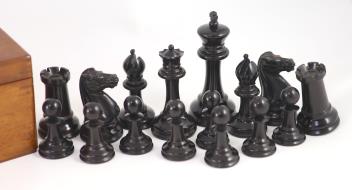 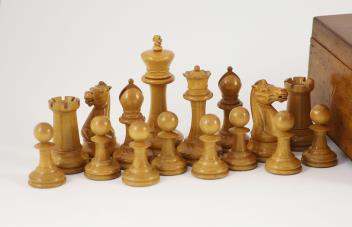 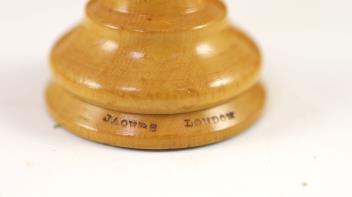 Condition:
Diameter of white king's base 48.5mm Please note one black pawn has a glued section to the collar. Overall all in very good condition with rich state of colour, one or two tiny nicks and scuffs but no real faults noted, box probably has later baize lining, which is now a little faded, remnant of label fixed to the inside of the lid. No key to the box. Box is probably associated, its known that Fisher retailed Jaques chess sets and stamped their name on the boxes, but the pieces are a little large to fit in the box. White King impressed around plinth Jaques London. One black and one white Knight with impressed coronet; one black Rook and one white Rook with impressed coronet.