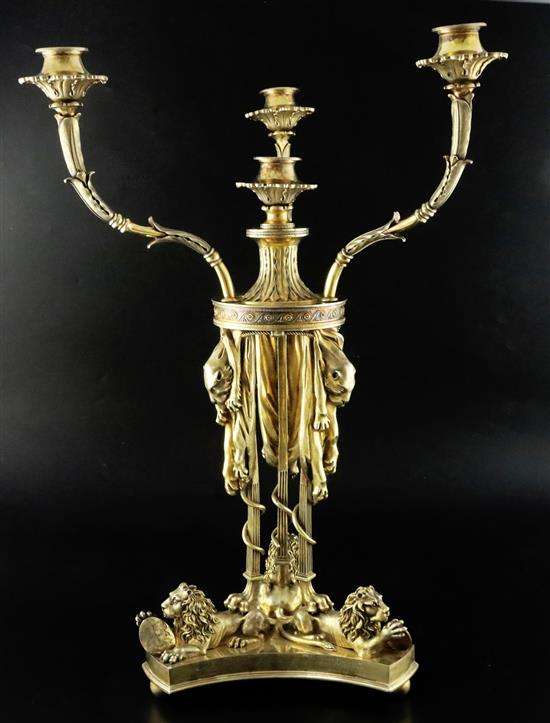 A George III silver-gilt four-light candelabrum, Digby Scott & Benjamin Smith, London 1806, the concave triform base raised on three ball feet, engraved with presentation inscription: 'To Hardinge Stracey Esq./The Light Horse Volunteers/of London and Westminster/Voted at a general meeting of the Corps 5th June 1805./on his retiring from the Majority of their Regiment/in Testimony of their lasting Esteem and in grateful acknowledgement of his services'; supporting three cast lions couchant, each holding a shield bearing the arms of the City of Westminster, the arms of the City of London and the badge of the Light Horse Volunteers respectively; the three detachable acanthus-wrapped branches issuing from a circular central sconce raised on three square fluted columns terminating in claw feet and hung with lion pelts; with a 19th century oak box bearing brass plate inscribed Hardinge Stracey Esq., candelabrum height 61cm; weight 316.5 oz.
Estimate £10,000-15,000

Note: Major Hardinge Stracey is recorded as commandant of the London and Westminster Light Horse Volunteers in 1804.

Provenance: The estate of Major Hardinge Stracey and thence by descent

The proportions between the base and the arms possibly suggests that there may have been a central stem that originally raised the central sconce??
There is some minor wear to the gilding on the leaf capping on all three arms. Also some mild wear to the gilding to the ears and paws of the draped leopard skins and to the legs and manes of the lions on the bases. Minor nicks and surface scratches around the base and in other places in general, commensurate with age and use. Overall condition is otherwise good, with all pieces clearly hallmarked.