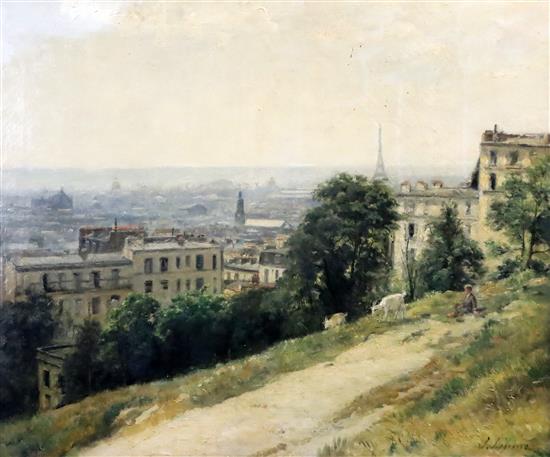 Note: See Southampton City Art Gallery collection for an almost identical version of this subject. The picture concerned was offered at Christie's, London, 3 April 1936 as lot 124 when it was bought by Sir Kenneth Clark (by then Director of the National Gallery). Later that year the work was purchased from Sir Kenneth for 18 guineas (Chipperfield Trust). It is recorded in the Southampton City Art Gallery notes on their picture that 'A second painting by Lépine, also dated 1892, with a very similar composition, was with the dealer Arthur Tooth in 1955'.

Oil on original canvas which remains tight, paint is extremely dirty with either nicotine or similar discolouration across the work except the extreme the top left corner where it has been cleaned to some extent to show the colour differentiation, a little fine but stable craquelure running through the paint really only noticeable in the sky, various darker scattered dirt specks and marks, signed lower right, housed in an ornate and probably original gilt gesso frame which suffers from one or two small losses, old ink inscriptions and small labels to the top of the centre stretcher along with the remnant of a label from Alfred Daber, lower down Arthur Tooth & Sons label no.09356, top right label for Durand-Ruel of New York, two later hand inscribed white labels.