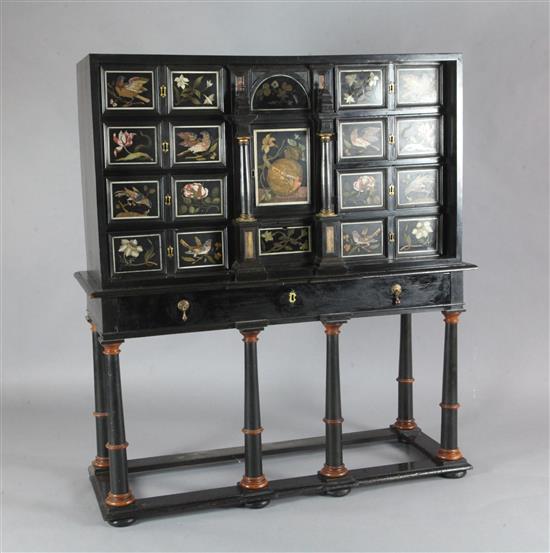 A 17th/18th century Italian and later pietra dura and ebony veneered cabinet on an ebonised wood stand, the cabinet with an arrangement of ten drawers each inset with Florentine hardstone panels depicting birds and flowers around a central door decorated with a melon and butterfly, enclosing four ebony fronted drawers, on an ebonised pear wood? and yew wood, the single frieze drawer with oak linings, W.4ft 2in. D.1ft 7in. H.4ft 6.5in., restorations
Estimate £3,000-5,000

The panels were produced in the Grand Ducal workshop in Florence (originally named the Galleria dei Lavori), founded in 1588 by the Grand Duke Ferdinand I de Medici.

cf. Christie's, London, European Noble & Private Collections Including Fine Tapestries sale, 2 October 2013, Lot 271 for similar pietra dura bird panels. The catalogue states that comparable plaques can be found in cabinets crafted in Augsburg in the second half of the 17th century. For example in the collection of the Weimar Residenzschlosse and the Kunstgewerbemuseum in Berlin (both illustrated in R. Both & G.-D. Ulferts, Möbel Urhen Relifintarsien, Berlin 2001, pp. 92-99).