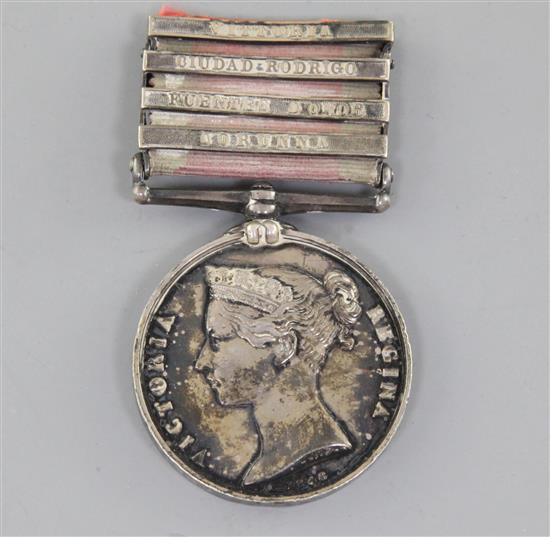 See lot 34 for the sword awarded to Captain Snodgrass.

The following obituary was originally published in the Illustrated Sydney News,10th December 1853 page. 5

Snodgrass, Kenneth (1784-1853)
The late Colonel Snodgrass was born in the west of Scotland about the year 1784. The Colonel was the eldest son of a Doctor of Divinity of the Church of Scotland, and his mother was the sister of Sir K. Douglass, Baronet. At an early age he entered the army, and distinguished himself as an officer of the 52nd Regiment. His excellent military qualities soon attracted the General in command, and he was on various occasions selected as leader of extraordinary attacks on the French during the war in Spain, and for many years was entrusted with the sole command of Portuguese battalions. In the "Exploits of Wellington," "Maxwell's Life of Wellington," and the "Subaltern," this distinguished officer's courage as victoriously leading the "forlorn hope" at St. Sebastian, is particularly narrated. On that occasion the Colonel, then only a Major, lost 200 men, before he reached the bastions of the fortress. The citadel was taken by Snodgrass and four hundred British soldiers, the French fighting hand to hand. For this act he was presented with a magnificent gold sword and medal. The Colonel was twice wounded, as a recompense for which he enjoyed a considerable pension until his death. When Sir .T. Franklin left Van Diemen's Land, he administered the civil government of that island, and afterwards that of New South Wales, between the departure of Sir Richard Bourke, and the arrival of Sir G. Gipps. His venerable mother only died about a year ago, aged 90; his brother, the late Lieut. Colonel Snodgrass, formerly aide-de-camp to Sir Archibald Campbell, the conqueror of Burmah in 1825, died several years ago. The late Colonel Snodgrass has left two married daughters and several sons, one a major in the 96th regiment in India. He was no less distinguished for his social qualities, his unbounded hospitality, and goodness of heart, than for his military acquirements. He was well known in the colony as Commander of the Forces and originator of the Mounted Police during the desperate bushranging period. The Colonel died on the banks of the Hunter, of gout in the stomach, in October, 1853.

Heavily oxidised, clasps slightly bent out of shape but no sign of there being any missing a clasp, minor dents around the edges of the medal, naming is clear, ribbon in tatters