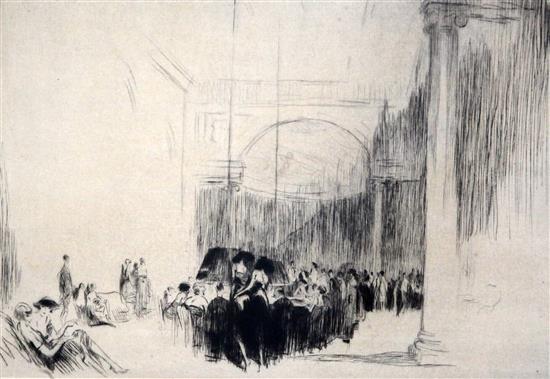 Etching - paper has discoloured to a light buff tone which is evenly across the work, one or two small scattered fox specks and insect dirt marks but overall fair condition, not laid down, mounted to just beyond the plate mark, signed and numbered lower right, with the title inscribed upon the mount, further inscription in the lower left corner of the mount saying number 11 or of 25 prints taken, although the number on the print itself looks to be 11/75.
Housed in the original slightly grubby cream mount and slim ebonised frame which has had a few knocks and scratches, the accompany original pen and ink cartoon has even discolouration to the paper and one or two small scattered dirt marks, original mount is discoloured and inscribed in ink with the title. Further original label to the back with again the title reproduced partly in pencil and partly in ink, not framed.