Lot 300 , A second quarter of the 18th century and later quarter chiming table clock, height 25.5in. 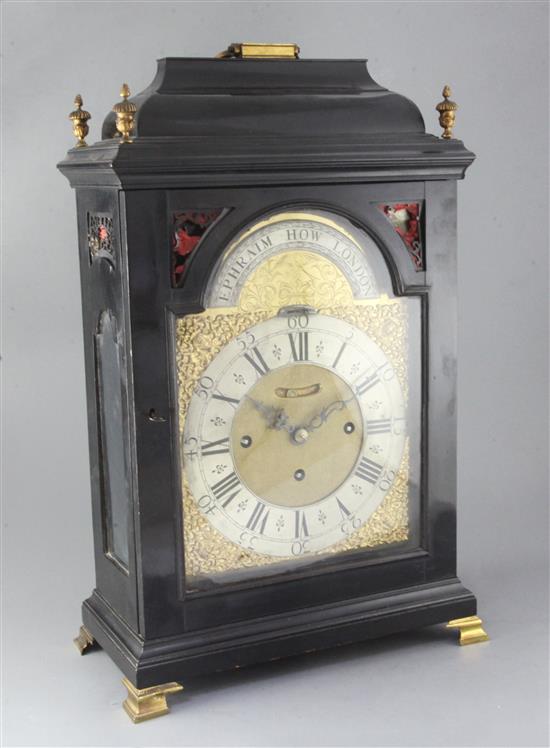 A second quarter of the 18th century and later quarter chiming table clock, the ebonised inverted bell top case with shaped side frets raised on brass bracket feet, the 10 inch brass dial with foliate mask spandrels and mock pendulum aperture to the centre, the silvered Roman and Arabic chapter ring with fleur de lys half hour markers below a strike silent lever, signed 'Ephraim How, London' to an applied silvered plaque to the arch, over engraved ho ho birds and scrolled foliage, the late 19th century three train chain fusee movement with anchor escapement chiming the quarters on a rack of eight bells and the hour on a separate bell, the plates united by four tapered pillars, the backplate engraved with foliate scrolls within a wheat-ear border, height 25.5in.
Estimate £1,000-1,500

Case: Some shrinkage cracks and occasional small repairs to the veneers, most notably to the arch of the left side glazed aperture. All the frets are damaged. Brass furniture a little dull. The mask has several neat repairs and two losses, one to the bottom right of the arch, the other at the IX o'clock position

Dial: Good. Some minor wear to the chapter ring, mostly near the chime/silent lever.

Movement: Lacks pendulum. The movement retains some polish, but is dirty with old thickened oil. All trains function, but are reluctant. This could be remedied by an overhaul.