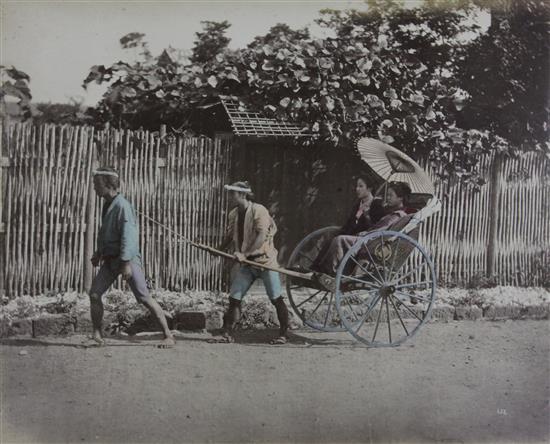 A late 19th / early 20th century photograph album 'Views and Costumes of Japan by Stillfried and Andersen of Yokohama', containing one hundred and eight colour tinted photographs of actors, tradesmen, landscapes and temples, housed in a leather bound Japanese lacquer cover with labels for Hall & Holtz of Shanghai and the bookplate of John Eaton Coates, largest photographs 8.75 x 11in., album overall 12.5 x 15.75in.
Estimate £1,000-1,500

The album cover itself is cracked to the lacquered front and with some slight chips on the front, the leather spine completely disintegrated, however the photographs inside - the pages are a little undulating where they have warped at some stage, the images themselves are clear but there is some browning around the edges of the images and then the card pages which they are mounted on have some foxing and staining particularly toward the front pages and the rear pages, otherwise fair condition.
4 photographs are 28 x 22cm
18 photographs are 14 x 10cm
87 photographs are 24.5 x 19.5cm