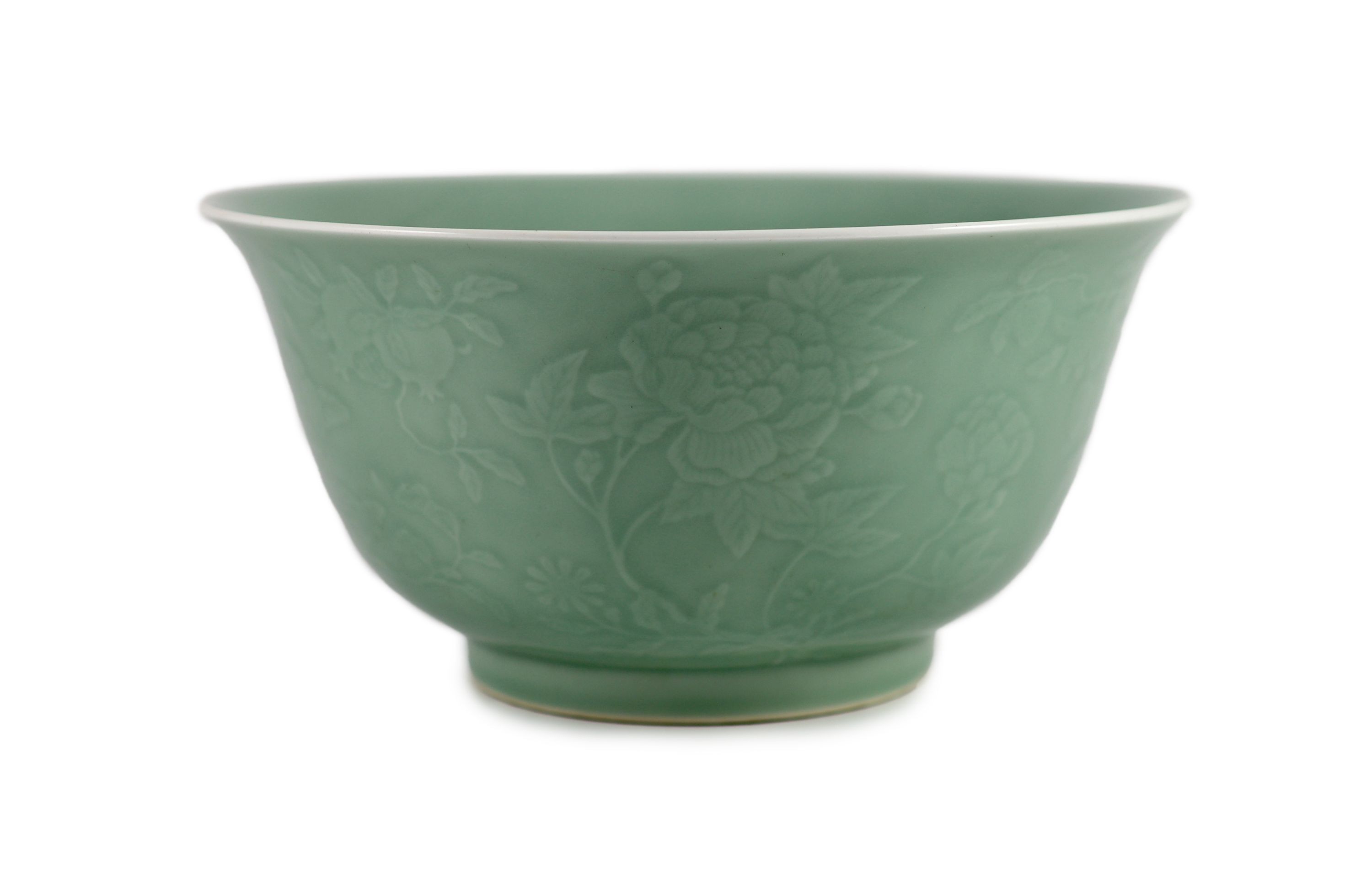 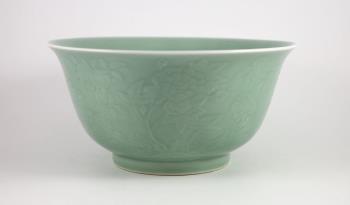 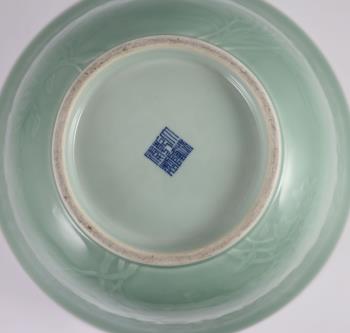 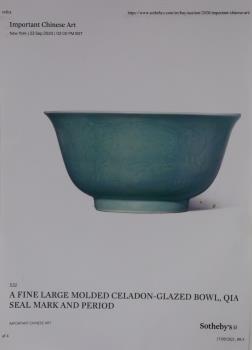 A fine large Chinese moulded celadon-glazed bowl, Qianlong seal mark and of the period (1736-95),
the deep rounded sides rising from a slightly tapered foot to an everted rim, the exterior finely moulded and decorated in white slip with sprays of pomegranate, peaches, lychee, and ‘Buddha’s hand’ citron suspended above auspicious flowers including, peony, lotus, prunus, and aster, covered in a deep sea-green glaze, with white glazed rim and footring, the base with a six-character seal mark in underglaze blue.

Please note there will be no online bidding for this lot. If you wish to bid on this lot you will be required to pay a deposit of £5000 by electronic transfer only which will enable you to bid by telephone, in person, or by absentee bidding (Unsuccessful bidders deposits will be refunded). All requests for bidding and all cleared funds for deposits must be received by 10am on 7th December.

The present example belongs to a rare group of large celadon-glazed bowls decorated to the exterior with fruiting and flowering auspicious plants in shallow relief. These bowls were made during the Yongzheng (1723-1735) and Qianlong (1735-1796) reigns and each bears the emperor’s seal mark in underglaze blue on the base. The pair to this bowl was sold by Sotheby’s, New York, Important Chinese Art, 23 September 2020, Lot 532.

Compare also a Qianlong period bowl of this type, but with a white interior, in the collection of the Tsui Museum of Art, illustrated in The Tsui Museum of Art, Hong Kong, 1991, pl. 127. A closely related bowl from the Meiyintang Collection sold in Sotheby’s Hong Kong, 9th October 2012, lot 33; and a third sold at Christie’s, Hong Kong, 30th May 2006, lot 1349. For examples with a Yongzheng seal mark, see a bowl in the collection of Anthony Gustav de Rothschild illustrated in Regina Krahl, The Anthony de Rothschild Collection of Chinese Ceramics, vol. 2, London, 1996, cat. no. 144; one from the collection of the British Rail Pension Fund that sold at Sotheby’s, Hong Kong, 16th May 1989, lot 57; and another that sold at Christie’s New York, 18th September 2003, lot 350.

Provenance - The Hon. Alfred Clive Lawrence (1878-1926) thence by family descent. Lawrence’s father was the 1st Baron Trevethin. Alfred was commonly known by his middle name Clive and was a solicitor with ther Ministry of Labour between 1907 and 1923 and was appointed Commander, Order of the British Empire (C.B.E.) in 1918. He was awarded the Order of St. Maurice and St. Lazarus of Italy and was Procurator-General and Solicitor for the British Treasury in 1923.
Rim 33.6mm diameter, 16.5cm high, foot 16cm diameter
£20,000-30,000

Condition:
Minor occasional scratches to the glaze otherwise in excellent condition with no restoration, chips or cracks