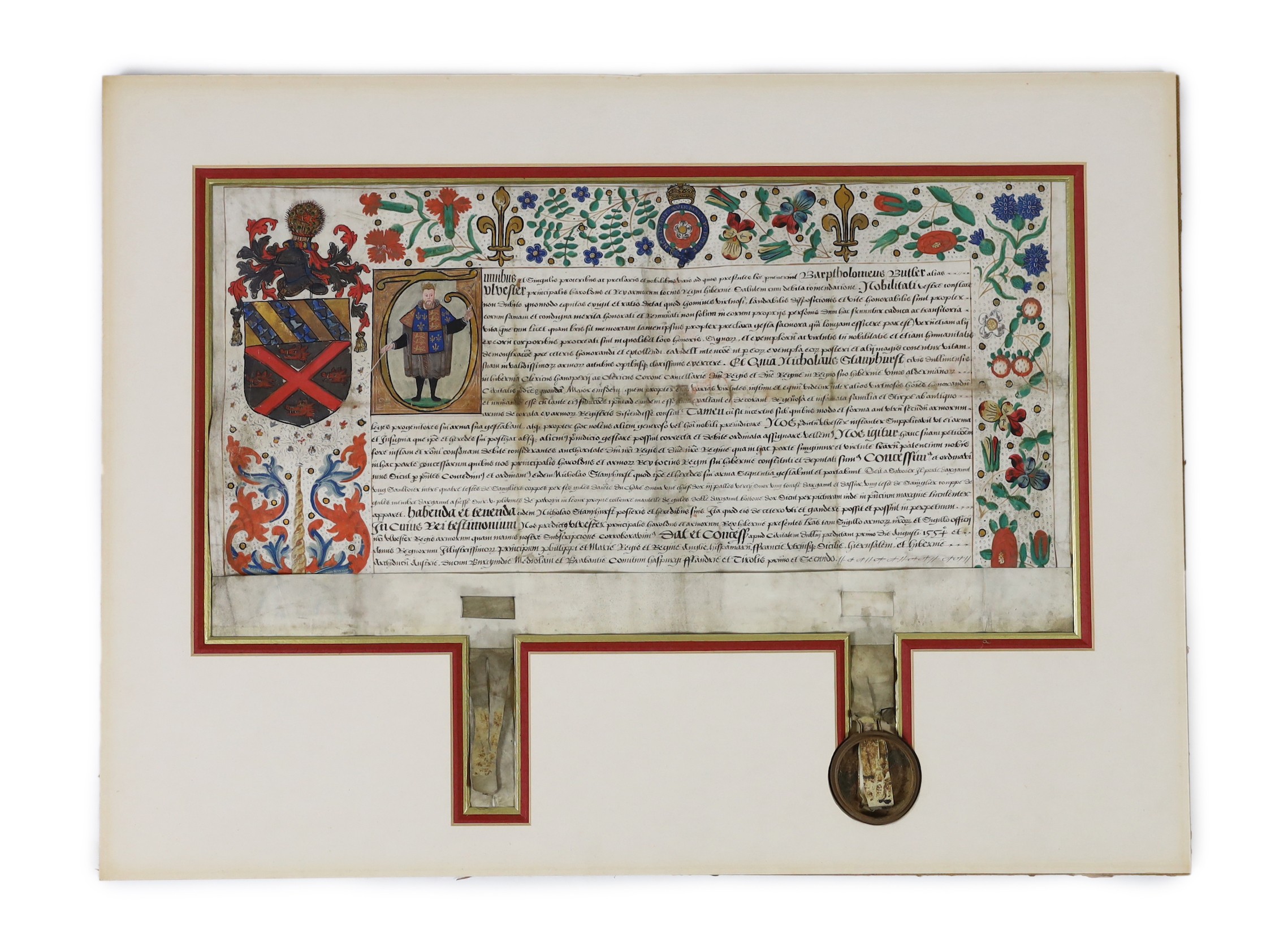 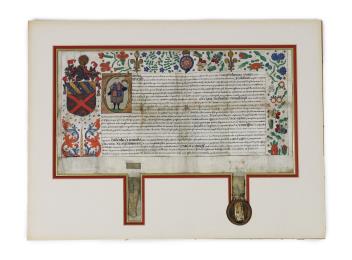 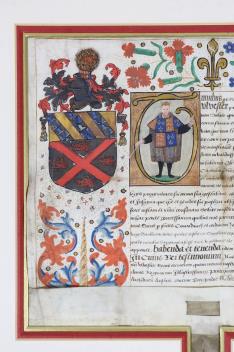 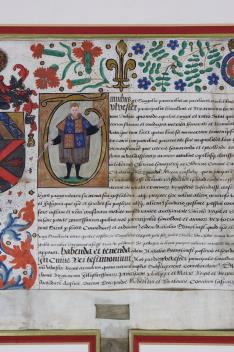 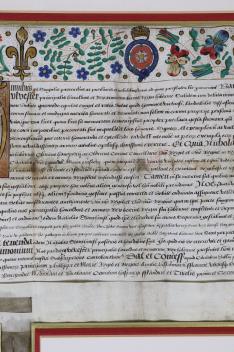 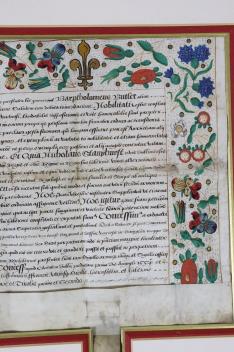 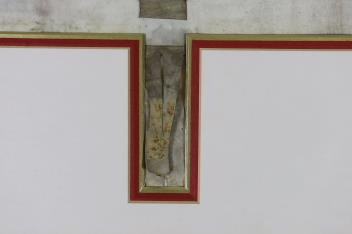 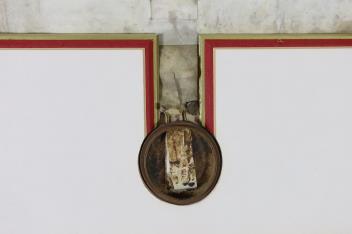 Proem reciting that virtuous men should be rewarded not only on account of their own merits, but also that their progeny should be honoured and extolled

Recites that although the family have been armigerous, as can be shown from the registers of arms, the form of their arms is uncertain, as is whether they bore them in accordance with the laws of arms; but being unwilling to prejudice any gentleman or nobleman, in accordance with Nicholas’s petition and by virtue of the letters patent granted to Butler, he grants the following arms, depicted in the margin:

These arms would now be blazoned Argent a saltire between four boar’s heads erased gules armed or/argent, on a chief or three bendlets vair; on a torse argent and azure a boar’s head couped gules membered argent, seated on five peacock feathers proper, mantelled gules and argent buttoned or. The torse is painted in different colours from the blazon.

(by me Bartholomew Butler otherwise Ulster, King of Arms of Ireland)

Ink and colour on parchment, 318 x 575 mm; in the initial letter an image of Butler, wearing a gold crown, with a fur-lined coat beneath a tabard with the quartered arms of England and France, and pointing with a white wand of office towards the depiction of the arms; in the top border the lilies of France flanking a crowned garter encircling a Tudor rose; the top and right margins decorated with carnations, forget-me-nots, pansies, roses, thistles and strawberries; the left margin shows the full achievement of the arms as granted, surmounting a staff resembling a narwhal’s tusk arising from red and blue mantling against a floral background.

Tags for two seals [Butler’s seal of office and his personal seal], neither present, but with the lower half of a turned wooden skippet still attached to the smaller tag.

This must be one of the earliest surviving grants issued by Ulster after the establishment of his office two years earlier in 1552. Although a letter O (for omnibus) is called for, the initial letter of this grant is clearly a T. Grants by the herald Thomas Hawley (d1557, see ODNB), who like Bartholomew Butler may have been a Scot (for example British Library Add. MS 37687 of 5 April 1556, and Guildhall Library MS 21734 of 15 Oct 1556), show him crowned, bearded and identically attired to Butler in this grant. That, and the lack of any Irish symbolism such as a harp (which had clearly emerged by 1604 – see the frontispiece to National Library of Ireland GO MS 66) may suggest that at this early date no iconography specific to Ireland had emerged, and that in the years immediately following its establishment the office of Ulster King employed as a template for its own productions grants issued by Thomas Hawley as Clarenceux.

Nicholas Stanyhurst (c1490-1557) was from a family already established as officials in the Dublin administration in the late 14th century. He was first appointed Clerk of the Crown in Chancery on 24 August 1532, and on 23 September 1547 he was re-appointed with his son James Stanyhurst; appointed Clerk of the Hanaper in Chancery on 11 August 1535; Clerk of the Parliament 19 May 1541; on 7 May 1540 he obtained a 21-year lease of the abbey of St Bridget of Odder in Co. Meath, and in the following year was granted the site of the Dublin White Friars for a fine of £44 10s 0d; mayor of Dublin in 1543; in 1547, when he was granted a lease of property on the north side of the church of St Werburgh in Dublin (of which he had been churchwarden in 1541), he was described as a notary; he was dead by 4 December 1557 when his son James Stanyhurst received livery of his lands. His son James Stanyhurst (1522-1573) and grandson Richard Stanyhurst (1547-1618) have entries in the Dictionary of Irish Biography.

The office of Ulster King of Arms was instituted in February 1552; the title replaced that of Ireland King of Arms which had lapsed on the death of Walter Bellinger in 1487. Butler and his successor Nicholas Narbon had been English heralds and even after their promotions had been regarded as members of the College of Arms, though sharing in the fees only as extraordinaries. After Narbon’s resignation in 1588 all connection with the College was severed.

Condition:
Vellum is undulating and a little dirty with stains from where at one point it has been folded, perhaps slightly faded but colours still strong, original seals have now been lost, card mount but no frame or glazing.