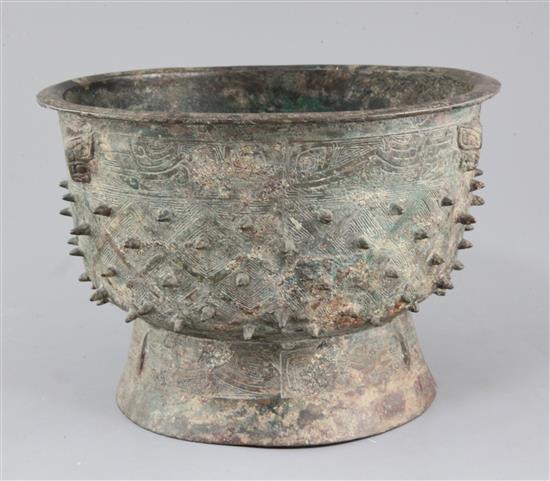 
Literature:
Yu were popular during the Anyang phase of the Shang dynasty, but disappeared in the early Western Zhou, to be replaced by the handled gui. The combination of shape and the diamond and boss decoration of the present yu appears to have been particularly popular in Shaanxi province during the Shang period, as seen in several excavated examples illustrated by R. Bagley, Shang Ritual Bronzes in the Arthur M. Sackler Collections, pp. 504-7, no. 98, figs. 98.3-5 and pp. 510-14, nos. 100 and 101, figs. 100.1-3 and 101.1-2. These excavated vessels exhibit some variations in the shape, the types of bosses and the narrow decorative bands.

An almost identical yu from the Karlbeck Collection is illustrated by B. Karlgren, "Marginalia on Some Bronze Albums", BMFEA 31, 1959, pp. 289-331, pl. 12a. Karlgren also illustrates a yu with similar boss and diamond band on the body, and similar taotie band on the foot, but a different band below the rim, in "Bronzes in the Hellström Collection", BMFEA 20, 1948, pl. 57:2, and notes, p. 35, that it is from Anyang.

Jean-Claude Lepileur was a man of great learning. Born in Lisieux in France, he became a buyer and seller of antiques and formed a partnership with Mrs Senta Christian in a joint antiques venture, travelling to and from England from their early base in Deauville in Normandy. Mr Lepileur was a self-taught historian, chemist and restorer, with a particular love of all things Asian, especially pieces of art from China. And more specifically ancient Chinese bronze artefacts, which he collected avidly all his life.

Mr Lepileur and Mrs Christian moved their business to Finchley in London in the 1950s and they continued to operate as a partnership until 1996, when Mrs Christian passed away. Jean-Claude had a very discerning eye for art and at one point even managed to identify two original Rembrandt sketches for sale on a stall on Portobello Market and was able to purchase them for a few pounds. They were later fully authenticated by the Victoria and Albert Museum. Mr Lepileur was also a frequent visitor to the British Museum in those days as he was always keen to compare his latest Chinese bronze acquisitions with those in the collection of the museum. During his life he amassed a collection of some eighty bronzes and a number of ceramics, pictures and scrolls. He also collected over 60 reference books, many of them very detailed, which he used to assist him with his research. Mr Lepileur was still buying and selling up until his death in December last year, aged 90.

The collection is presented complete, with no omissions and is a great tribute to his skill in identifying, researching and collecting some wonderful pieces of Chinese art.

Crack to one side extending downward from the rim just above the angular foot, otherwise in reasonable condition.