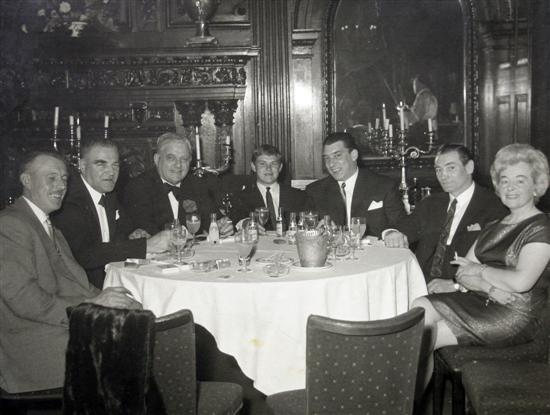 The Krays: The original black and white photograph of Ron Kray and Lord Boothby also photographed are Charlie Clark, Goodfellow (Boothby's butler), Terry Spinks and Mr and Mrs Billie Exley. This photograph was held by Ron as blackmail over Boothby; later given to JP by Ron's mother, Violet. Accompanying this is letter from Ron in Durham Prison stating that he has asked his mother to give John the photograph, NOW WITH a banning order from the Governor of Tangier excluding Ron from Morocco in 1966 as an 'undesirable' 6.5 x 8.5ins
Estimate £300-400

This photograph is of a dinner at The Old Society restaurant in Jermyn Street, (now the night club 'Tramp'), in early 1964. Ron organised it as a thank-you to Boothby fr taking him to dinner at The House of Lords a few weeks earlier.