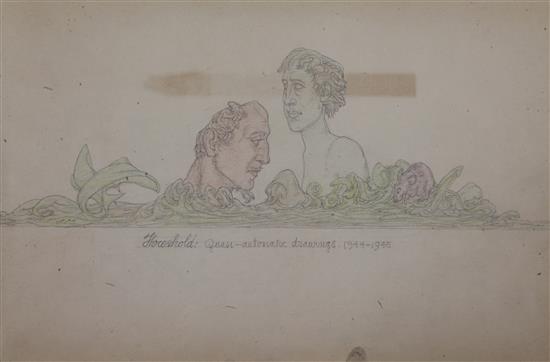 FROM A PRIVATE COLLECTION IN EASTBOURNE

An introduction by Dr William Wallace, an acknowledged authority on the life and work of the artist and author of The Catalpa Monographs: A Critical Survey of the Art and Writings of Austin Osman Spare - Jerusalem Press, 2015

The suite of fine drawings by Spare offered here for sale represent sketchbook works but of accomplished presentation drawing standard, and represent one of his usages for this medium, permitting his inspiration to unspool sequentially onto the pages from his restlessly combinatory imagination.

He is unusual amongst artists, in that he was prepared to sell his sketchbooks; these are usually retained by artists as containing germinal ideas for more resolved works. Whilst Spare also did this he was not possessive about them, and at times they were extensions of his own published occult-philosophical works. Good, early examples include the exquisite mystical bookworks in ink and watercolour The Focus of Life & The Papyrus of Amen-AOS (1905-6) and The Arcana of AOS & the Consciousness of Kia-Ra (1906), developing ideas from his first published book Earth:Inferno (1905), both sold to his friend and mentor, the avid collector, Pickford Waller (1873-1927), possibly in the hope of publication. This was only realized in 2011 as Two Grimoires which succinctly conveys their magical nature. The title The Focus of Life would be invoked again by Spare for his published oneiric odyssey and masterwork of 1921

Spare was again selling sketchbooks by 1924, and again to Waller with Satyros at Stroud, a mythologised vision of the Gloucestershire landscape in pencil, coloured pencil and watercolour, produced on holiday far from the fleshpots of the Boro'; 'Satyros' being one of the artist's alter-egos. His accompanying letter to Waller is upbeat, Spare having been bucked by the sale of four drawings to Lord Leverhulme. Two other sketchbooks of that year have since been part-published, the sublime Ugly Ecstasy, with its grotesque, Baudelairean vision of beauty, bought by Gerald Reitlinger (1900-1976), and The Valley of Fear: Metamorphosis, with its Sherlockian title (Spare loved detective stories), another Waller acquisition. Another, (1925;published 1972), A Book of Automatic Drawings, is actually quasi-automatic, with more finely finished grotesquerie

Overall, the sketchbooks vary, from the type of fluent ludic outpourings of the automatics, to finely finished sequences verging on discreet narrative as in an unfolding journey, to more didactic sketchbooks intended as instructive for students of his Austin Osman Spare School of Draughtsmanship. Others contain preparatory drawings for larger pastel paintings and other work, and even, as with one owned by his great friend and amanuensis Frank Letchford (1916-1998), a combined sketch/scrapbook with pieces collaged over full-paged drawings of c.1954

Several notable sketchbooks, including types (drawings) here offered at auction were produced whilst the artist was "fire-spotting" for flying bombs over his beloved Southwark. One such, (recently published) consists of 24 highly finished drawings, entitled: Adventures in Limbo, obliquely recalling the Dantean influence of the 1905 Earth:Inferno. Spare, like Blake, viewed London as both (literally and metaphorically) as both concrete and spiritualised as well as charged with mystery. In Dante's Limbo, the poet in wonder sees the noble pagans later revered by Spare: Aristotle, Socrates, Plato, Democritus, Diogenes, Heraclitus, Anaxagoras, Thales, Zeno (of Cittium), and Dioscorides. The artist was to reveal tellingly in his 'Mansion House' pub show catalogue (1952) that his sketchbooks for sale (items 101-111) are titled Cacoethes Scribendi. These range from12 to 48 drawings priced from £2 10s to £8.00. He describes them thus:

Cacoethes scribendi: Twelve sketchbooks of original ideas. A work of art often owes its virtue to omission as well as revision or consummation; yet equally (if not more so), the uninhibited nature of the contents of artist's scribbling books are instructive, potent and stimulating, because they show the creative faculty in unhindered operation, and the underlying ideas motivating the artist are in some measure revealed. Those purchasing these sketchbooks obtain therewith both the copyright and my permission to exploit any of the ideas as their own

The 153 exhibition at 'The White bear' tavern offered "sketchbooks by request" (items 141-2) One of these, from Letchford's collection (No5) of twelve drawings features Witches Sabbath scenes, and one drawing is of three plinthed satiric heads labelled 'Carus Lucretius', 'Apuleius', and 'Zeno of Elea', there is a distinct whiff of Faustian brimstone. Several drawings in this book were developed; one, into an ink drawing on wood: 'Evocation by Acrobatics' appeared in Spare's last show- at the Archer Gallery in 1955 (no 139). Conversely, one drawing is a version of 'These are the Women' (minus the anthropomorphic tree) which had been shown at 'The Mansion House' pub in 1952, although the title occurred at Spare's "Home Show" of 1936 (no 8). Another book owned by Letchford is a mix, starting with a list of titles for his last exhibition and several preparatory sketches, such as 'Ghosts are Sidereal' (no 45) alluding to Spare's method of anamorphic distortion, and part of the 'Ghosts I Have Seen' series.

Sketchbooks in the Bower-Dalton collection reflect their diversity. Spare has used an autograph book for his mainly satyrized heads and titled it A Book of Satyrs (after his second published book of 1907). The 29 drawings probably capture the mythologised heads of ARP, AFS and ambulance personnel, again whilst on fire-watching duty, capturing the denizens of the wartime blackout Inferno. Another in the same collection is titled Static Alignments (1944-5) comprising twenty demonstration drawings for students. Another of 1944: Ideas and Transcriptions From Life: Drawn for Students was presented after the war, to Frank Letchford, displaying a variety of experimental styles

The title Cacoethes Scribendi of 1952 for his sketchbooks provides a clue to Spare's motives. The term originates (typically) with a satirist, Juvenal (late 1st-2nd c AD), who refers in Book III (7th Satire) to: "insanibile scribendi cacoethes" an incurable passion for writing (drawing in Spare's case), as almost a pathological compulsion. Again, the classical world collides with London, with Juvenal's influence on Sam Johnson (1709-1784), in his London of 1738. The phrase also occurs in a poem by Oliver Wendell Holmes (1809-1894), the first line reading: "If all the trees in all the woods were men". In fact, Spare does sometimes present trees in anthropomorphic form. The present sketchbook drawings reveal a glimpse into the mind and soul of an extraordinary artist

Gorringe's are grateful to Dr Wallace for providing this learned overview